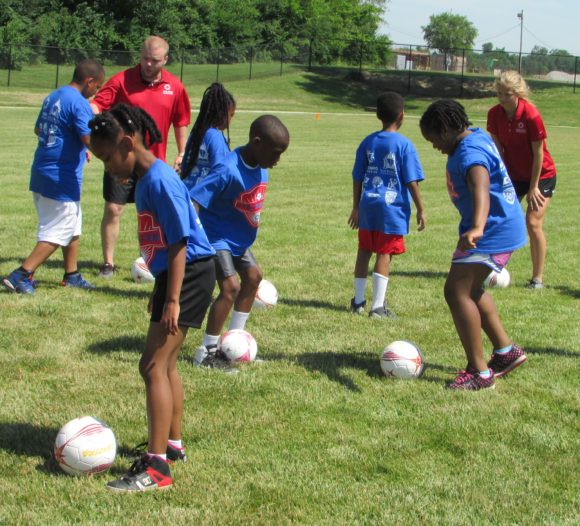 The temperature was in the nineties but that didn’t stop the youth soccer players and trainers from having fun and honing their skills at the JJK Soccer Clinic sponsored by the Bob Emig Foundation on June 11, 2016 at the Jackie Joyner-Kersee (JJK) Center.

About 75 youth participated in the free clinic and were treated to some high-level skills training from some of the area’s best soccer organizations.  “We have been supporting soccer at the JJK Center for three years and wanted to take it the next level beginning with this clinic,” said Aaron Emig, Bob Emig Foundation founder and president.  “We reached out to the soccer community and had a great response with over 30 trainers from eight organizations attended.  Many of them have committed to be guest trainers throughout the fall JJK Center soccer season.”

During the past three years, the Jackie Joyner-Kersee Center has run a fall soccer program with about 75-100 participants.  The Bob Emig Foundation has supported the program in a number ways including by providing trainers and sponsoring the soccer banquet.  Suess has spearheaded the training effort, donating many volunteer hours on the field at weekly training sessions.  “We’ve seen the program grow year by year,” says Suess.  “This includes not only the youth’s soccer skills but also the involvement of parents and the community.”

ShaVon Wilson, JJK Center program coordinator, has helped recruit and develop parents who assist in coaching and managing the teams.  He has also organized games with a number of St. Louis organizations to provide experience for the developing soccer players. This year the center will form teams which will play in the Belle Clair Soccer League.  “This program is growing and catching the hearts of many kids,” says Wilson.  “We have great support from the Bob Emig Foundation and look forward to this upcoming season.”

“I am pleased to be here to honor my late friend Bob Emig who had a dream of seeing soccer in East St. Louis,” says Mike Moore, former professional and collegiate soccer coach and Nike soccer representative. “We have a great turnout of kids of all ages and some really quality coaches, and I’m just happy to be part of it.”

“We are here because we want to reach out to all kids who want to play the game,” says Tom Michler, co-founder of New Dimensions Soccer.  “We love the game and working with kids.  We focus on fun not outcomes and using the game to help the kids grown life skills.”

“We will continue to help grow the sport of soccer in East St. Louis,” says Emig.  “Our dad had a vision of this for the city and our mom grew up there, so the foundation is committed for the long run.”

The Bob Emig Foundation is named for the late Bob Emig, an area sportswriter and a leader in developing youth through participation in sports. In line with his passion, the foundation focuses on “Inspiring Youth Athletes…Transforming Lives” by providing youth opportunities to enjoy the benefits of a healthy sports experience.