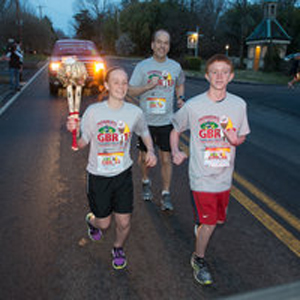 April 16, 2013 — MARYVILLE, IL — The Bob Emig Foundation provided the opportunity for two promising youth track athletes to showcase their skills as they ran a leg of the Homers for Health Game Ball Relay (GBR13) on April 8 as part of the kickoff of the second annual Homers for Health program to benefit children at SSM Cardinal Glennon Children’s Medical Center.

Brendan Peterson, 14, and his cousin Andrea Frerker, 14, both students at Collinsville Middle School, ran the 3.5 mile third leg of the relay.  The event started at 5:15 a.m. at Rawlings’ headquarters in Chesterfield with three-time Olympic athlete and two-time World Cross Country Champion Craig Virgin of Lebanon, IL, running the first leg.   It ended with Cardinal Hall of Famer Ozzie Smith running the ball into Busch Stadium before the Cardinals Home Opener.

“We were both honored and excited to have the opportunity to run in this event,” says Peterson.  We really appreciate the Bob Emig Foundation asking us.”

“It was a special day for us, especially since we got to do it together,” says Frerker.

Both athletes spend a lot of time together training and competing.  They both earned 2nd place at the Illinois state cross country tournament last fall.  Both have both overcome personal challenges to compete. Peterson has myasthenia and Frerker juvenile diabetes.

“The foundation was excited to give these two young track stars this opportunity,” says Camille Emig-Hill, Chairman of the Board of the Bob Emig Foundation.  “I understand that they are excellent students and that sports play a very important part in their lives. Their dedication and determination make them role models for how youth can benefit from a healthy sports experience.”

The mission of the Bob Emig Foundation is to promote the well-being of youth through sports, especially by providing participation opportunities, supporting education and awareness of the benefits of sports participation and recognizing role models for youth.  The Foundation has supported more than 20 youth sports organizations in the past year.  Examples include:

The Bob Emig Foundation is named for the late Bob Emig, an area sportswriter and a leader in developing youth through participation in sports. In line with Bob’s passion, the Foundation focuses on “Inspiring Youth…Transforming Lives.”   Bob was a sports reporter for the Metro-East Journal from 1966 until it closed in 1979. During his career, he was also a freelance reporter for the St. Louis Post-Dispatch, KMOX Radio and the Suburban Journal newspapers. Bob served as the editor for the Redbird Review newspaper in the early ’80s.  From 1994-2001, Bob was the Director of Competition for the Prairie State Games, Illinois’ largest amateur sports festival.

In 2001, he was named to the Illinois High School Basketball Association Hall of Fame for his media

contributions throughout the years. Bob was also a Lifetime Honorary member of the Baseball Writers’ Association of America.